MONTREAL, Nov. 26, 2018 (GLOBE NEWSWIRE) - Today, Railway Age announced that the 56th annual recipient of the Railroader of the Year Award is CN President and Chief Executive Officer Jean-Jacques "JJ" Ruest, leader of one of North America's best performing Class I railroads.
"JJ Ruest took a railroad plagued with service problems and serious network capacity shortages and implemented aggressive capital investment and service quality programs," said Railway Age Editor-In-Chief William C. Vantuono. "These efforts have produced outstanding results, in terms of traffic growth and profitability. As examples, CN's engineering team completed more than 80% of expansion projects while the network was under heavy traffic. And in Ruest's first few months as chief executive, CN hired hundreds of new line employees in train and engine service, laying a strong foundation for the railroad's continued success. Our Railroader of the Year sees strong growth opportunities ahead, across multiple commodities and new supply chain services."
"On behalf of the entire CN team, I am extremely proud to accept this honour," said Ruest. "The North American rail industry plays a critical role in our economy. Our human talent, our deployment of technology and infrastructure are what make our industry supply chain services so relevant to all the customers who depend on us."
JJ Ruest was appointed CN President and CEO in July 2018 after having served as Interim President and CEO since March 2018. He was previously Executive Vice President and Chief Marketing Officer since January 2010, with responsibility for providing strategic direction and leadership for CN's Sales, Marketing and CN Supply Chain Solutions groups. Ruest joined CN in 1996 as Vice President Petroleum and Chemicals. He was appointed Vice President Industrial Products in 2003, Vice President Marketing in 2004, and Senior Vice President Marketing in June 2006. Prior to that, Ruest worked for 16 years at a major chemical company.
Ruest holds a Master of Business Administration degree in Marketing from HEC Montreal (Universite de Montreal) and a Bachelor of Science degree in Applied Chemistry from Universite de Sherbrooke. He also completed the executive program of the University of Michigan Business School and CN's Railroad MBA program.
Railway Age will formally present JJ Ruest with the Railroader of the Year award at the Union League Club of Chicago on March 12, 2019, where the presentation has traditionally taken place during the Western Railway Club dinner.
Railway Age's Railroader of the Year Award
The Railroader of the Year Award was initiated by Modern Railroads magazine in 1964 as the "Man of the Year" award. Railway Age acquired Modern Railroads in 1991 and has presented the award annually since then.
-
CN is a true backbone of the economy whose team of approximately 25,000 railroaders transports more than C$250 billion worth of goods annually for a wide range of business sectors, ranging from resource products to manufactured products to consumer goods, across a rail network of approximately 20,000 route-miiles spanning Canada and mid-America. CN - Canadian National Railway Company, along with its operating railway subsidiaries - serves the cities and ports of Vancouver, Prince Rupert, B.C., Montreal, Halifax, New Orleans, and Mobile, Ala., and the metropolitan areas of Toronto, Edmonton, Winnipeg, Clagary, Chicago, Memphis, Detroit, Duluth, Minn./Superior, Wis., and Jackson, Miss., with connections to all points in North America. For more information about CN visit the company's website at www.cn.ca. 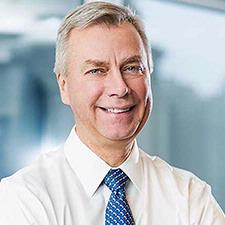